Dividends on top of income tree 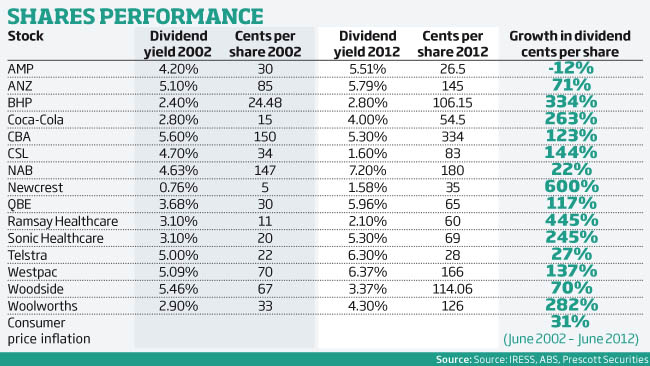 Dividend growth over the past 10 years.

INCOME is king in our post-GFC world, and king of the kings at the moment is dividends from shares.

Attractive tax benefits, better returns than bank deposits and inflation-beating growth over many years have drawn investors back to shares in the past six months, giving our stock market a welcome boost.

Several of Australia’s most well-known companies – including Telstra, Westpac and AMP – are paying dividends yielding more than 5 per cent. That’s down from 6-7 per cent last year because their share prices have climbed, but still beats bank deposits of about 4 per cent.

Other companies are paying higher dividends, but experts warn that chasing the biggest income return is dangerous.

Unlike cash in the bank, dividend income is not guaranteed, can fluctuate in times of turmoil and, in the worst-case scenario, can disappear completely if the company collapses.Prescott Securities chief economist Darryl Gobbett says investors should tread carefully, and dig beyond headline dividend yields to help build a sustainable income.

“Often people stretch for an additional two or three per cent yield per annum without considering the much greater prospect of losing some or all of their capital,” he says.

“Some companies are paying dividends at unsustainably high levels in order to keep prices high.”

Others have a high yield because their share price has fallen, which raises the yield at the same time the company may be battling issues that threaten future dividends.

Wealth For Life Financial Planning principal Rex Whitford also says investors should be wary about “financial engineering” around dividends.He says before the GFC many property trusts were borrowing more and more money simply to pay high levels of income, “and in the end it fell in a big bundle”.

“However, that’s not happening at the moment in the current market,” he says.

Dividends have a big advantage over other types of income. They often come fully franked, which means the company has paid 30 per cent tax on its profits so the investor gets a tax rebate. For super funds and lower-income earners such as retirees, that becomes an extra tax refund.

Cash in the bank is taxed at marginal tax rates and doesn’t rise over time like share dividends tend to because of inflation and profit growth.

Income from rental properties averages 4.2 per cent for houses and 4.9 per cent for units, but property has high costs.

“My share portfolio never rings me up and tells me it’s lost its job and can’t pay the rent, and I don’t have to fix the airconditioner,” Whitford says.

However, fear of losses turns people away from shares, he says. “I understand that, but if the dividend remains the same, it’s the income that counts in retirement.”

Lonsec head of equity research Bill Keenan expects low growth for dividends this year amid muted corporate profits, but does not see a crash coming. “The companies have got strong balance sheets,” he says.

“We think the four major banks will be pursued for their dividends. All are in good shape, and as long as they have some growth their dividends are sustainable. There’s little risk that the dividends will be cut by the banks.”

Keenan says dividends that regularly move up and down are a bad sign.

“If you see a high dividend, be more wary than excited. There’s usually a reason, and that’s that it’s unsustainable, because the company’s earnings are about to fall or it has too much debt.

“You need to see a track record. If you don’t see one, be a bit sceptical. Dividends are only a function of earnings.”

Choosing quality companies that pay growing dividends is a key to investment success.

Prescott’s Gobbett says many Australian companies have grown their dividends-per-share much faster than inflation over the past decade. These include Woolworths, up 282 per cent, and Coca-Cola Amatil, up 263 per cent.

Back to Financial News
stay up to date....
sign up for our newsletter and get the latest information!
"
Building a free and independent lifestyle needs more than just a drive to succeed and the skill to make it happen. It takes one of two other ingredients; good luck or good planning
"
Copyright ©2012 Global Financial - Developed By: CVWD Web Design Gold Coast
General Advice Disclaimer - Privacy Policy - Complaints - Contact Us